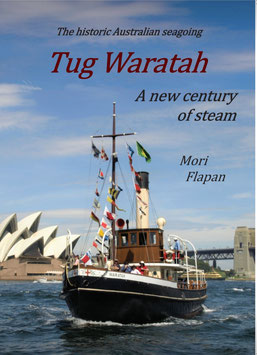 Tug Waratah a New Century of Steam by Mori Flapan

The stirring tale of the colourful history, acquisition, restoration and ongoing operation and maintenance of the 1902 steam tug Waratah.

A concise yet comprehensive story of one of SHF's operating historic steamers.

Bondi to the Opera House

A high quality historical overview of the very large Sydney Tramway system, one of the most extensive in the world and largest in the Southern Hemisphere.

An absorbing read with many photographs which will bear repeated scrutiny in detail.

Individual studies of each line, the tram types, the workshops and preservation.

96 PAGES ALL COLOUR  (except B&W originals).

Pilot on Board by Brendan Moloney. The 175th anniversary history of the Port Phillip Sea Pilots

The first pilot, George Tobin, was licensed to ply his trade by Governor Gipps in Sydney in 1839 when Victoria was known as the Port Phillip District of New South Wales. There were no lighthouses at the Heads or along the coast to help ships on their way and the only navigation aids into the Yarra River were tea-tree stakes hammered into the by John Batman’s men.

In the early days, the pilot was put on a ship and taken off by a whaleboat launched from the beach at Queenscliff and rowed by convicts. The whaleboats, which had a limited range and did not put to sea in bad weather, were replaced by much bigger sailing cutters that provided a permanent cruising station outside the Heads from 1853.

The pilot’s job is to bring ships safely in and out of Port Phillip Bay and Western Port. In the Rip, the treacherous, narrow entrance to the bay, this requires exceptional seamanship, stamina and steady nerves. Modern pilot launches are a marvel of marine design that can handle the Rip in most of her moods but the pilot still boards and disembarks on a rope ladder at all hours and in all weather.

Wild seas were not the only danger the early pilots faced. Tobin had his ship, Childe Harold, taken by bushrangers. Captain Henry Draper survived being shot by a musket and stabbed with a cutlass when his ship, the Nelson, was boarded by 20 armed desperadoes who stole 8000 ounces of gold in Hobson’s Bay in 1852. Captain Montgomery Robinson was on the bridge of the German ship, Pfalz when the first shot of World War 1 was fired across her bows off Point Nepean in 1914.

A lot has changed in the past 175 years but some things remain the same. Batman’s ship Enterprise was the biggest man-made structure in Melbourne in 1835. Today, some of the oil tankers pilots guide into port, still, are bigger than the city’s tallest building.” 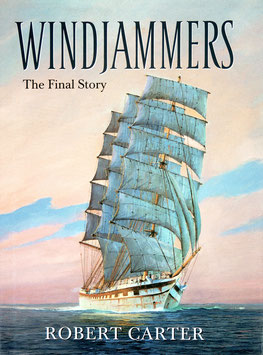 Robert Carter collected data for this book for over 30 years.

An impressive collection including maritime paintings by the author.

It is an anthology of stories, anecdotes, poems, photographs and drawings depicting life, culture and activities in the last commercial sailing ships between the years 1906 and 1957 and is illustrated with 42  paintings.

The information  was recorded first-hand from the final generation of sailing ship mariners. As there are very few still living, this book will be the last to use the words of those who experienced life in these ships. 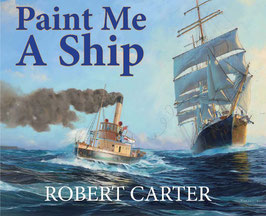 Paint me a Ship by Robert Carter

A work to pore over at leisure noting the precise detail perfect artistry and the wonderful sense of motion in the sea and sails.

Paint Me A Ship is a unique, luxurious, full-colour publication intended for readers interested in marine art and the history it captures.

In Part I there are 30 major new paintings completed since the publication of my first book, Windjammers – The Final Story, each with historical and artistic notes. I have also includes a chapter with insights and practical information for how to capture the sea, sky and weather conditions so that a painted ship truly looks like a ship, shared from a lifetime of painting.

In Part II I have gathered together outstanding examples of contemporary marine paintings, models and scrimshaw, created by members of the Australian Society of Marine Artists. The book celebrates the 20th anniversary of the Society and includes over 70 works I consider to be equal to the world’s best. 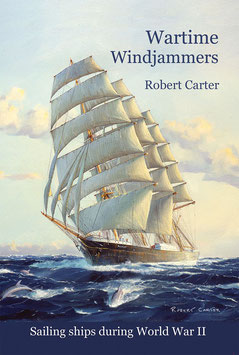 Glorious maritime paintings by the author conveying a wonderful sense of the deep seas, subtleties of light and precise detail in the ships, with historic photos

Wartime Windjammers is a monograph exploring the important – yet little-known – role played by the last sailing ships during World War II.

Although already the author of two books and numerous articles on the subject of the last fifty years of the sailing ship era, it occurred to me that a significant narrative was waiting to be singled out and told …

As World War II was raging and hundreds of thousands of tons of shipping were being sunk, there were twenty-seven large sailing ships quietly contributing to the movement of precious cargo around the world, four of which became victims of enemy action.

Wartime Windjammers shines a light on this little-known aspect of the war, and brings together the story of the ships, their crews and their wartime voyages. 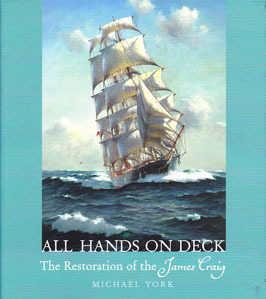 All Hands on Deck by Michael York

The impressive story of the raising of a hulk back to the glory of James Craig as she is now.

Hands on Deck follows the history of a ship built in 1874 as Clan Macleod carrying cargo to and from seaports all over the world, before being renamed James Craig in 1905.

The ship was a rusting hulk, sunk and abandoned for 42 years. ...  Now completely restored down to every rivet and wooden plank, every sheave and strand of rope, she makes regular ocean voyages, sails billowing from all three masts. 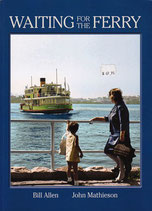 Waiting For the Ferry by Allen and Mathieson

A beautifully produced detailed study of the history of ferries on Sydney Harbour from the Parramatta River ferry in 1789, up to the year 2017 and the latest large catamarans (Victor Chang class)

Each ferry service is treated in detail according to destination.

In Whom We Trust by John Dikkenberg

In Whom We Trust deals with sea disasters from the perspective of the ships’ captains.

Written by John Dikkenberg, a former naval captain and one of the masters of our sailing ship James Craig, the book brings a rare insight into the characters of the captains and what led these men to make the decisions that destroyed their ships. In many cases those examined fell into disaster having adopted the common attitudes of their day, some were incompetent while others were the victims of poor support from their companies or respective navies. In a few cases, they were let down by the material state of their ships or the technical inadequacies of their weapons.

The book follows  a century of maritime history and demonstrates the role of leadership, whether on the bridge at sea or directing operations ashore. 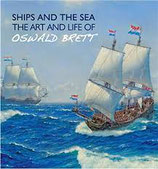 Ships and the Sea. Ship paintings by Oswald Brett

A book of  superb paintings of famous sailing ships, working sail from colonial times, warships and modern freighters  by Australian Oswald Brett. The author tells his own story: learning to paint in Sydney as a boy; war service at sea and global travels. Paintings of The Golden Hind, James Craig, Endeavour, the First Fleet, Queen Elizabeth, Cutty Sark, Bounty, Bismarck and many more.